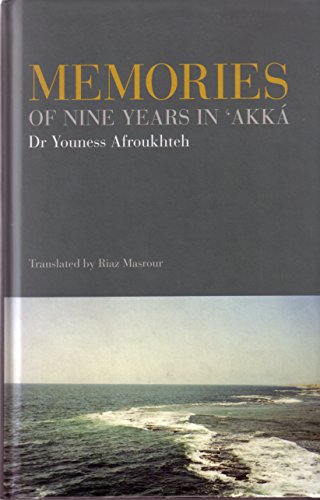 Here is the translation of Khatirát-i-Nuh-Saliy-i- Akká, the memoirs of Dr. Yúnis Afrukhtih who served 'Abdu'l-Bahá as His trusted secretary and interpreter from 1900-1909. These were difficult years when the Master was imprisoned in the city of 'Akká, His every move subject to misrepresentation by the Arch-breaker of the Covenant and his associates, and even His life in danger. At the same time the period saw the victories of the construction of the Shrine of the Báb and the House of Worship in Ishqábád, and the rise of the Cause of Bahá'u'lláh in the West.
This important historical record, published in 1952 on the instructions of Shoghi Effendi, has been described as pre-eminent among those works dealing with the history of Covenant-breaking . At the same time it chronicles the daily life in 'Akká of Abdu'l-Bahá and of the little band of devoted believers whose chief joy in life was to be of service to Him; it also describes the pilgrimages to 'Akká of many eminent early Western Bahá'ís including Thomas Breakwell, Hippolyte Dreyfus, Lua Getsinger and Laura Barney, the compiler of Some Answered Questions.

Over those nine years Jináb-i-Khán (the title by which Dr. Yúnis Afrukhtih was honoured by Abdu'l-Bahá) served the Master in 'Akká as secretary, translator, envoy and physician. His account of some of the most significant events of the period, his graphic and stirring pen-portraits of Abdu'l-Bahá, and the description of his own emotions - all expressed in a lively and at times mischievous language of humor and wit - make this volume uniquely memorable.